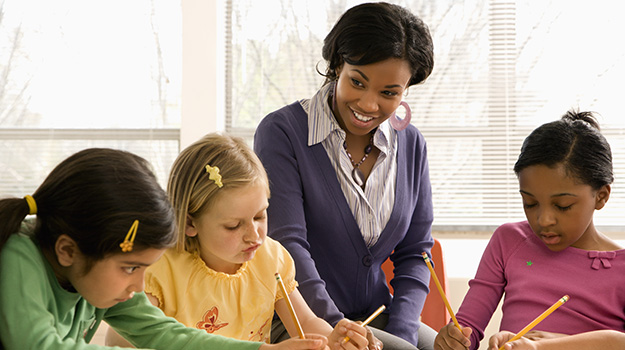 We as language teachers are expected to teach writing. The research essay and position paper are staples of composition classrooms. At the same time, students need to move beyond genre. How, then, can you teach students to write? I’ve spent 25 years teaching and researching how to help students move beyond the argumentative or cause-and-effect essay to just write.

At Be a Better Writer in 26 Lessons, my friend Rob MacKenzie and I present A through Z lessons that boil writing down to its essentials. Each lesson is short and focused, aimed at aspiring writers and language learners, and backed by a “learn” exercise and a “use” exercise, because the best way to learn to write is…to write. In this article, I address an idea that is mystical to many but in truth totally teachable—the idea of flow. To make ideas on the page flow like water, I teach my students to follow six simple guidelines.

In setting these guidelines for my students, I present them at three levels: at the sentence level, from sentence to sentence, and at the paragraph level.

At the sentence level, start with this: (1) Make the person doing the action (the actor) your subject whenever possible. Yes, I know passive voice has its uses. However, even in technical and scientific writing, statistics show that writers use passive voice far less than many believe—usually to describe research methodology. In general, passive voice is only used to vary sentence structure or when your actor is unknown or unimportant. It often refers to an institution or a rule. At the same time, behind the institution or rule, there’s a person pulling the lever—and a reader will want to know who’s doing the pulling.

Making your actor your subject reveals truth. Your reader knows not just the action but who is accountable. Examine the following from the U.S. Constitution and Dr. Martin Luther King, Jr.:

The versions on the right obscure; the ones on the left reveal (both the who and the what). Good writing makes both actors and action clear—and that starts with having a clear subject for each sentence.

The second guideline focuses on readability: (2) Put any dependent clause first and make it eight words or fewer. Noted composition instructor Joseph Williams (2006) claims six, not eight, as his magic number. Readability indexes also agree that shorter clauses and more frequent verbs make a text more readable. Still, as a language teacher, I feel that anything less than eight puts my learners in a hard spot. Later on, I allow my students to “flip” the sentence—that is, put the dependent clause last—only if it presents new information…but the eight-words-or-fewer guideline is constant. 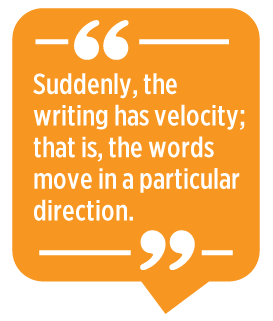 Students who follow this guideline have to economize. Just as the 10-items-or-less line gets you out of the supermarket quickly, the eight-words-or-fewer maxim forces your student to get to the main clause quickly. Suddenly, the writing has velocity; that is, the words move in a particular direction. This benefits your reader, who only reads because of the promise that the words will go somewhere.

3. Focus on the Psychological Subject

The next two guidelines help a student go from sentence to sentence. In particular, (3) focus on the psychological subject of each sentence. In short, know which noun or noun phrase connects to the sentence before and the sentence after, which may—or may not—be the actual subject of the sentence. To practice, give your students the following sentences to develop into paragraphs:

First, have students identify the nouns or noun phrases—in a) I, solution, good one and in b) they and train. Then, ask them to expand each sentence into a paragraph. To do this, they will use the next guideline.

4. Use Parallel or Sequential Structures

(4) Use either parallel or sequential structures. The English language moves in one of two ways. The first is in parallel. A sentence will have a topic (subject) and a comment (verb). In a parallel structure, the next sentence will have the same topic but a new comment. The second is sequential—that is, the first sentence will be Step 1, and the next sentence, still tied to the psychological subject of the previous one, will be Step 2. Let your students go back and forth between the parallel and sequential, but for the words to flow, these are the only two moves they need to learn. Here’s an example of parallel structure with the recurring topic in bold:

I know the solution is a good one. I want my students to make moves that an English-speaking audience will understand. When I speak Arabic or Japanese, I think and arrange my thoughts in a different way—and research supports this. Thus, I believe teaching parallel structure helps to make the “code” of the English language clear.

Next, here’s an instance of the sequential structure from 3b:

They met on the train, where they had seats side by side. The ride was a peaceful one. The gentle rocking motion of the train lulled both of them into sleep. When they woke up, they realized they had fallen asleep while leaning against each other. First, each apologized. Then, she joked about not knowing her ticket included a human pillow. Both laughed, and the sound filled the train car.

We use these structures not separately but in combination. As we read, I have students look for these moves in passages as well. Even for dense texts, students who know these two moves can, at minimum, read and follow a train of thought from sentence to sentence and paragraph to paragraph. In this way, teaching the art of clear writing will also make your students into better readers.

Now, let’s define clear writing at the discourse level. Just like every sentence has a topic (subject) and a comment (verb), (5) each paragraph has a topic sentence (general) and a discussion (specific). Students are traditionally taught to put the topic sentence first, but it works in a number of places. The details in a paragraph could come first and then be summed up by a topic sentence at the end. A paragraph could start with a question, then the writer could flesh out the paragraph by addressing issues and exploring options. One dramatic structure is the turnabout paragraph, one in which the writer addresses details from the opposing view first before planting a topic sentence in mid-paragraph and supporting it with details to finish with a flourish.

Finally, students need to know how to clarify the focus of a paragraph that is long or has many or complicated ideas. To do this, have students help the reader by (6) adding a summative sentence at the end. A student could make the paragraph circular by tying the topic at the end to the topic at the beginning. Alternately, that last sentence could sum up the main point in a simple subject-verb sentence. The writer can also give the reader a takeaway, to “put a bow” on the ideas previously discussed. These six guidelines set up your students for success—and knowing them will enhance a student’s reading and literacy as well.

For me, I teach these six all at once. Later, I follow up by having students submit a journal assignment in which they write to a topic and use the six guidelines. To reinforce them, I later guide students through editing for “flow” by looking at these same six items.

Now comes the punchline. To make any piece of writing come alive, students need to communicate emotion (authentic) and narrative (story and audience). Those two are the spark and, alas, most often they come from inside. However, by teaching these six guidelines, you can make sure that your students will have a clear flow of language ready when inspiration strikes.