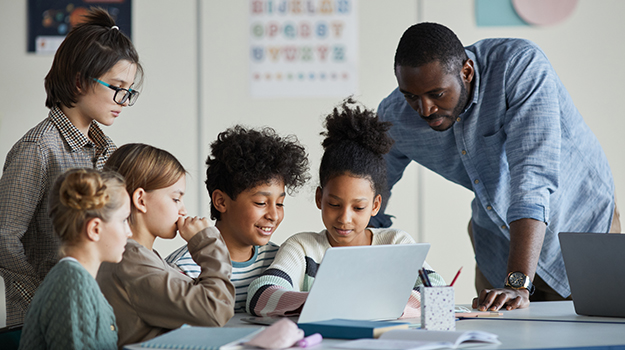 When it comes to assessment, teachers can be hesitant to give assistance to their students. In some instances, a “no help” approach makes sense. The goal of any assessment is to determine what students know and can do, and when a student completes an assessment on their own, this tells us what knowledge and skills the student has already developed. But a “no help” approach doesn’t tell the whole story. Specifically, it tells us little about the knowledge and skills that a student is still in the process of developing but hasn’t yet fully developed (Poehner, 2008).

Adopting a “no help” approach can therefore be problematic with English learners (ELs) in content classrooms (e.g., science, math, social studies), who are in the process of developing both their content and English language proficiency. In these contexts, ELs may be able to demonstrate their learning more fully when provided some assistance than would be evident from their independent performance alone.

In this article, I share three classroom-tested assessment probes that can help you get a more complete picture of what your ELs know and can do in the content classroom.* Specifically, these assessment probes enable you to clarify and dig deeper into ELs’ developing ideas and language toward the goal of uncovering both their content and English language learning. After introducing each probe, I illustrate how the probes work together in an assessment moment from an elementary science classroom.

Each type of assessment probe serves a different purpose with ELs in the content classroom. 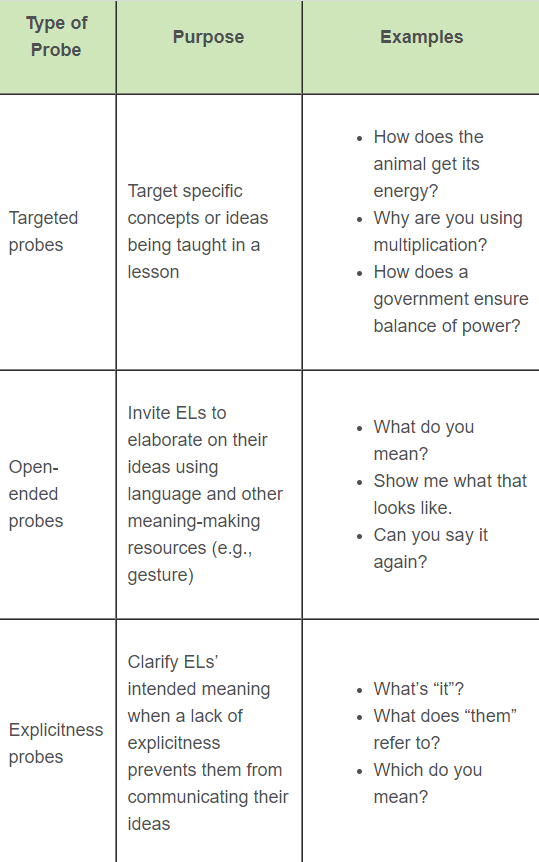 Whereas targeted probes are discipline specific (i.e., tailored to content concepts/ideas at a particular grade level), open-ended probes and explicitness probes apply to multiple content areas and grade levels (similar to some talk moves). What the three probes have in common is that they are intended to be used contingently by teachers—in other words, in response to ELs’ needs as those needs arise in moment-to-moment interaction. This means that using the assessment probes is as much about listening carefully to ELs as it is about responding to them.

Snapshot From a Fifth-Grade Science Classroom

In this assessment moment from a fifth-grade science classroom (see the NYU SAIL Research Lab for a full science curriculum for ELs), Mariana, an EL, was responding to a question posed by her teacher, Mr. Winter: “How is energy transferred into and through the ecosystem to the tiger salamander?” Prior to this moment, Mariana and her classmates had developed a model to represent a key science idea in fifth grade: Energy transfers from the sun to plants (tree) to animals that eat plants (earthworm) to animals that eat those animals (tiger salamander). 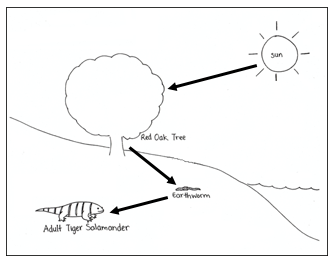 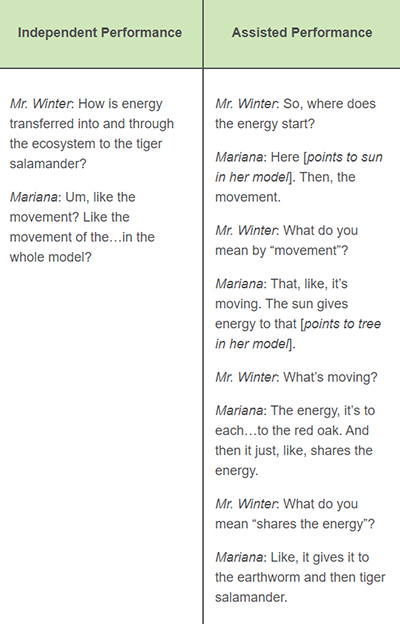 If Mr. Winter had relied on Mariana’s independent performance alone to assess her science understanding, he would have likely concluded that Mariana had learned very little in science. But through multiple rounds of probing on the part of Mr. Winter and elaboration on the part of Mariana, the two were able to jointly construct the correct path of energy transfer.

Specifically, Mr. Winter used a targeted probe (“So, where does the energy start?”) to focus Mariana on the key science idea and help her begin constructing the path of energy transfer. When Mariana used expressions such as “the movement” and “shares the energy,” Mr. Winter responded with open-ended probes (“What do you mean by ‘movement’?” and “What do you mean ‘shares the energy’?”) to dig deeper into her developing ideas. And when Mariana used a pronoun without a clear referent (“it’s moving”), Mr. Winter responded contingently with an explicitness probe (“What’s moving?”) to clarify her intended meaning.

Overall, Mariana’s independent performance told much less than the whole story of what she had learned, and it was only with some assistance from Mr. Winter that Mariana’s developing science ideas and language were revealed. Through careful listening and persistent probing, Mr. Winter uncovered the science in Mariana’s emerging efforts to express her ideas through multiple modalities of communication (saying “gives energy to that” while gesturing at the tree in her model) and everyday language (“shares the energy,” which was an especially creative take on the predatory behavior of animals eating each other!). Having uncovered that Mariana indeed understood the targeted science idea, Mr. Winter might have followed up with Mariana by revoicing her explanation to demonstrate the more conventional way of expressing the idea (e.g., “So, it sounds like you’re saying that the tree gives energy to…”).

Alexei Leont’ev, a lesser known colleague of Lev Vygotsky of scaffolding fame, wrote that the purpose of assessment should be not just “to discover how the child came to be what he is but how he can become what he is not yet” (as cited in Bronfenbrenner, 1979, p. 40). In the content classroom, assessment probes can help ELs become what they are not yet in terms of both their content and English language learning.

Though a “no help” approach to assessment may be necessary at times, given constraints on time and resources, this approach risks missing the knowledge and skills that ELs are still developing but have not yet fully developed. By using the three assessment probes in tandem to clarify and dig deeper into ELs’ ideas, teachers can get a more complete picture of what their ELs can do in the present as well as what they will be able to do tomorrow given sufficient support today.

*The empirical research study on which this article is based is Grapin, S. E., & Llosa, L. (2021). Dynamic assessment of English learners in the content areas: An exploratory study in fifth-grade science. TESOL Quarterly. Advance online publication.

Bronfenbrenner, U. (1979).The ecology of human development. Cambridge University Press.

Scott E. Grapin is an assistant professor of language, literacy, and learning at the University of Miami. His research focuses on the equitable teaching and assessment of English learners in K–12 education, particularly in their content-area classes. Scott began his career as a high school ESL and Spanish teacher.

This article first appeared in TESOL Connections. Reprinted with permission. 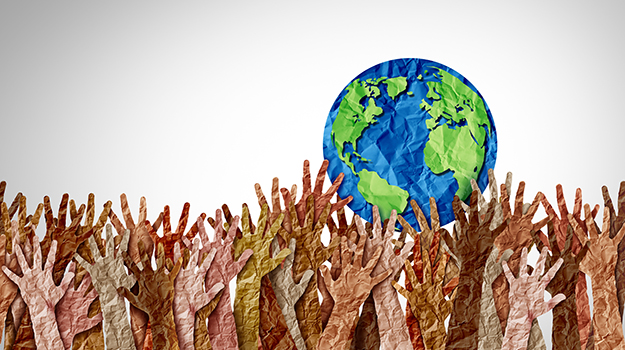 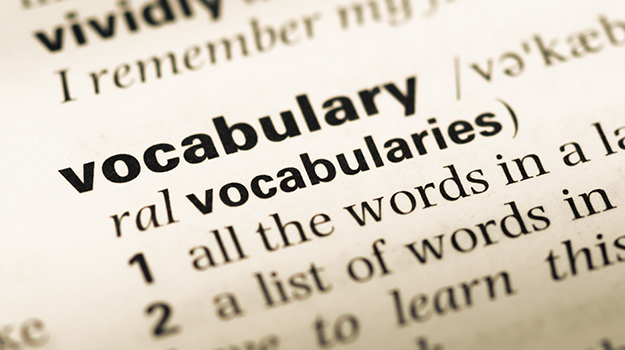 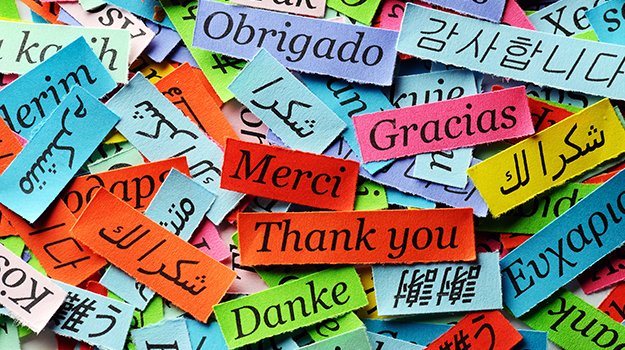